It has been a while since I last blogged, hasn’t it? well, today I will make up for my absence as I have some writing news that will intrigue you all!

For all us Horror enthusiasts out there we don’t get to say that often!

however, I am not only excited for today being the day of one of my all-time favorite movies, no, today marks a special occasion where my poem DELERIUM is featured in HELLBOUND BOOKS PUBLISHING anthology ‘BEAUTIFUL TRAGEDIES’

words can’t describe how honored I am to be featured in this anthology as my poem was a personal experience! I was nervous about submitting it but am very glad that I did!

if you all love to read dark poetry then this anthology will be for you! it is a raw experience into the world of pain, love, loss and…

Today I have a nice suprise as I bring you an author interview that I conducted recenty!

It was a great experience and very enjoyable.

This post was recently published on my other blog but I am posting it here too.

Kelly D. Smith is a twenty year old Author who hails from Rural Canada United States and has been Publishing her work for over two years. In those two years of hard dedication to her work, Kitty has sucessfully had five publications over the specified time.

Coming from a simplistic backround, it is safe to say that she is well versed in the lifestyle that Writers often dream of. She has had the pleasure of being able to see the world by travelling from place to place.

One of her favouriite places to live she tells me, was in a hundred and fifty year old log cabin in Quebec which was acommpanied by a hundred acres of land and a private lake!

Now settling down after buying a house earlier this year after getting married, Kelly now resides with her husband her cat and her Husky named Loki which she has had since she was six years old, to focus on her work!

Kelly also has a new book coming out shortly so make sure to stick around to see what she has to say!

AW: Hello Kelly, Thank you for taking the time out from your busy schedule to talk to me. So lets begin. What made you decide to become a Writer?

Kelly: I started writing when I was about seven or eight years old. I was actually a very slow reader but by the time I came around to reading, there wasn’t alot at my reading level that I Wanted to read.

I wanted Lord of the Rings, But at my reading level?! And that wasn’t there so I decided to write something that I would like to read!

After that I just fell in love with writing! Being homeschooled actually gave me a chance to work on my writing daily, and being around a mother who is also an author and a sister who wanted to become one – it just seemed like the right thing to do!

When I turned eighteen I had three short stories, novellas and novels to send to publishers – and one was actually accepted!

AW: That’s awesome! Coming from a family of creative people must have helped you immensly with your writing ability? Was your parents supportive of your writing ambition?

Kelly: In their own way, yeah. They’re not really the kind that are going to be ‘typically’ supportive but my parents always had this “You can do anyhthing” attitude towards things.

I’m not sure that they’ve ever come out to me and said it to me, not in those words at least, but if ever said “Oh i could never do that,” they would reply with “Why not?”

I dont think that they ever really thought that they had to be typically supportive, because to them it didn’t occur that I might not do it!

But often at times the best support you can have is people to talk to! Because of what I write, i’ve found working in the garage with my dad is super helpful and has inspired a couple of stories!

AW: You say your mother is a writer. What Genre does your mum dabble in?

Kelly: Mainly she likes to write gritty work, I know she’s still in the process of a couple of novels so I don’t want to give too many details away!

She also writes a little Romance, and last I checked she was writing a book on homeschooling!

AW: That’s great! What Genre do you dabble in?

Kelly: When it comes to Ghost Writing it seems like a lot of Romance. My own stuff, I love to write informative/how to as well as Fantasy/Urban Fantasy but i’m hoping to expand and Write some Crime as well.

AW: Being a Writer is often a reclusive job. Alot of time and dedication is poured fourth into our works and often our brains tend to go into overdrive to finish the piece and we become isolated in a fashion.

Have you found that being a Writer you have lost contact with the world around you in order to finish a piece of writing?

Kelly: Honestly, I’m not a hugely social person to begin with! I live in rural Canada and I love it, but yes I do find sometimes my work leaves me tuning everything and everyone out in order to get a job done in twenty four hours.

Overall though, no, I wouldn’t say it’s really made me lose contact. I think writing is like any other job, you have to find a good balance. And I think a huge key to that is finding other writer’s out there who understand the unique struggles of being a writer.

Its been a while since I posted anything, but I return now with an exciting new tag that I have been tagged in by: http://justkeepbrains.com/.

The challenge I have been tagged in is called ‘the quote of the day’ challenge which entails me to post three qoutes for three days and then tagging other bloggers to do the same!

You will have to excuse me if I mess up with this as this is my first tag and am not quite sure how to go about it but I will defiantly do my best!

The rules are pretty simple:

Post one qoute per day for three days and then tag another blogger to do the same!

So without further ado lets get this thing set into motion.

Why did I write? Because I found life unsatisfactory.” – Tennesse Williams

Ok so thats my first qoute done for today and I will return with another tommorrow and more tags!

Hope all is well.

I have been very busy as of late with racking my brains to find suitable markets for my articles and short stories.

It seems finally that my hard work and determination is paying off as I have now had my first short story accepted by a magazine.

Dark Gothic Resurrected Magazine. Any of you know it?

The theme is purely horror and all things marcarb right up my ally.

Tho is my second success this month, my first being an article accepted by another magazine. 😊

As we all know writing is beneficial in so many ways to the human system and is often used as a  therapeutic way to deal with life when going through hardships. I have to say that I write when my anxiety is soaring as it helps ground me and reminds me that I have my distraction and that is WRITING.

Without writing I would be a mess. Pure an simple. That’ the way of it.

I am lucky to have two creative outlets in my life:

2 The fact that I write and enjoy writing.

Ever since I was a child I have written. From poetry to stories to attempted plays, all these things I have done from a young

encourage all ages to write.

Hope all is well.

I just wanted to update you all and let you know Tha I signed my first official contributed agreement today for my first ever printed article Tha is going to be featured in Soul-d magazine this September.

so excited to see my name in print!!

Haven’t posted a while on here but I come to you now with an update in the life of an aspiring Writer.

I have recently had luck on my side as I have been working my fingers to the bone in my spare time searching endlessly for any magazines, both print and online, that are looking for contributors.

Well, It is safe to say that I have managed to bag a deal with a NEW and UPCOMING online magazine named Soul – D which is going to be launched this coming September!

The magazine is an online webzine that covers the subjects of beauty and stereotypes in all aspects and all cultures.

I have recently submitted my first piece to the Editor which received positive feedback and will be looking forward to seeing my article published online for a new and fresh magazine that covers a subject that I am most familiar with which is of course stereotypes!

I will keep you updated on the news as I would love to share with you my experiences as I aspire to get my name in print!

In general, my life has been hectic these last couple of months with being busy working and family problems but still finding the time to write down my thoughts every night.

I would of course had tried to find the time to keep you all updated but as you can imagine I have been busy.

However, recently I have had another article published online for another online magazine that I have been writing for the last year.

I will post the link below for you all to have a gander.

Leave feedback if you can!

I yearn to hear the truth escape from your lips

The reason for why you do things you do

I know your soul is not as tainted as you believe

For when I look at you its like looking at me

You told me that long had you searched for a lover

And then we became one with the other

For when your sober your a different man

Clear headed and a laugh

But now you want to go down a different path

Once again the drink has poisoned your mind

I have lost you to the bottle

Here is another poem that I promised you all.

It is incredibly short but I did write it in a time of Anxiety.

As usual let me know what you think.

Have a good one.

its hard to see,

I can’t decipher you from me,

Static vision of a broken television,

It was bound to happen.

Just a quick inspirational post today for us writers! 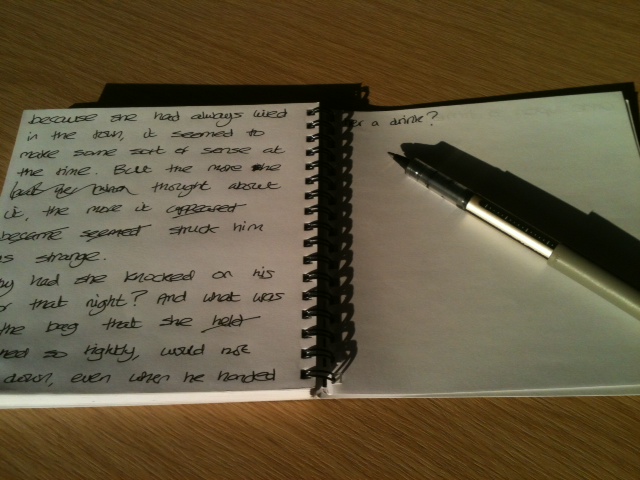 Aspiring Writer with the love for all things unique
Create a free website or blog at WordPress.com.